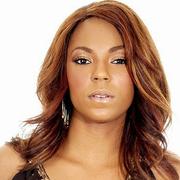 阿莎提来自纽约，小时候在教堂唱诗班练习合唱，然后学习舞蹈。后来她被Murder Inc．唱片公司的总裁艾夫戈蒂发现。戈蒂是一位资深的音乐制作人，曾一手推出了如今炙手可热的说唱乐才子贾鲁尔，他为爱徒阿莎提的音乐事业制定了周密的计划。 作为Murder Inc公司推出的第一位非说唱歌手，阿莎提一出道就受到了众位师傅师兄级人物的大力提携，很快戴上了“R＆B／Hip－Hop新公主”的耀眼光环。艾夫戈蒂和贾鲁尔为她的音乐注入了一些经过软化了的街头音乐元素，使她拥有了更广泛的年青听众。 阿珊提的演唱在低沉贝斯的ＨｉｐＨｏｐ舞曲中如行云流水一般，而在慢热的Ｒ＆Ｂ情歌中她的一字一句又感觉恰到好处，不存在撕心裂肺的卖弄与炫技。 JenniferLopez、JaRule、FatJoe这些曾为小妮子Ashanti写词或合唱的人物个各都大有来头，而她的表现也不负使命，在排行榜上屡建奇功。身为嘻哈名厂MurderInc.的掌上明珠、开业以来第一位节奏蓝调歌手，Ashanti甫出道却毫不生涩，表现超乎众人想象：为JaRule跨刀合唱“AlwaysOnTime”创下DefJam厂牌有史以来最畅销单曲纪录，并拿下Billboard流行榜&节奏蓝调双料冠军；接着她自己的出道首发单曲“Foolish”勇夺Billboard节奏蓝调单曲榜&流行单曲榜双周冠军；与硬蕊饶舌能手FatJoe合唱的“WhatsLuv？”也连登流行榜与节奏蓝调榜前三名，因而形成流行榜与节奏蓝调榜内同时有三首歌挤入Top10的历史性画面。   With hitmaker Irv Gotti at the helm, Ashanti blasted into the urban music scene in 2002, topping the charts with multiple singles at once. She quickly became a sensation, gracing the covers of magazines and dominating urban radio. Ashanti built her reputation with duets, where she would complement an already popular rapper — Ja Rule ("Always on Time"), Fat Joe ("What's Luv?"), the Notorious B.I.G. ("Unfoolish") — contrasting the tough-guy male perspective with her own. It didn't take the young vocalist long to make a name for herself though: her debut album topped the Billboard album chart just as her debut solo single, "Foolish," was topping the Hot 100 chart. Her presence was inescapable.   Ashanti's overnight jump to superstardom followed that of Ja Rule, a similar urban music sensation helmed by Gotti. The New York producer took notice of Ashanti initially because of her beauty, dancing, and acting. She trained as a dancer at the Bernice Johnson Cultural Arts Center, learning a number of dance styles. She danced most notably in Disney's Polly, which starred Phylicia Rashad, and also appeared in a number of big-name music videos, in addition to other dance work. As an actress, she made a name for herself with roles in Spike Lee's Malcolm X and Who's da Man before that. The multi-talented vocalist was causing quite a stir, and Gotti did what he could to bring her into his Murder Inc. fold. After showcasing her swooning voice on Big Pun's "How We Roll" and the Fast and Furious soundtrack — both in 2001 — Gotti put Ashanti to work on her debut album, which he produced.  Success came quickly. A duet with Ja Rule, "Always on Time," hit number one on Billboard's Hot 100 chart in early 2002 just as a duet with Fat Joe, "What's Luv?," was creeping toward the same number one position. These two airplay-heavy singles set the stage perfectly for Ashanti's self-titled debut release. The album's lead single, "Foolish," raced up the Hot 100 chart, entering the Top Ten in March alongside "Always on Time" and "What's Luv?," giving her three Top Ten songs in the same week, including the number one and two positions — a quite spectacular feat. And then Ashanti's album debuted at number one on the album chart, selling an astounding 500,000-plus copies in its first week. With all this chart-topping, Ashanti set some sales records and her success continued. Gotti readied a remix of "Foolish," titled "Unfoolish," that featured the Notorious B.I.G. and again overtook urban radio, where no artist was more omnipresent throughout 2002 than Ashanti.   She returned the following year with Chapter II, which likewise topped the Billboard album chart on the heels of its hot lead single, "Rock Wit U (Awww Baby)." The album's success was somewhat eclipsed, however, by all the negative drama surrounding the Murder Inc. camp at the time (i.e., the FBI investigation and the G-Unit feuding). A Christmas album followed late that year, and Concrete Rose appeared in December 2004. Though she remained with The Inc. for 2008's The Declaration, she sought out a number of producers outside the label's in-house team.

The Way That I Love You - Ashanti