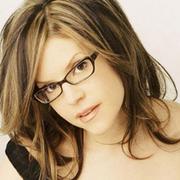 歌曲创作与表演总是结合生意盎然的流行旋律与精练的抒情叙事手法，Lisa Loeb清新动人的音乐风格处处让乐迷充满惊喜。拥有常春藤名校布朗大学比较文学学位的她，93年在演员好友Ethan Hawke的邀请下，为电影《四个毕业生》创作了清新悦耳的主题曲“Stay”。单曲发行后一鸣惊人的蝉联全美流行榜3周冠军，Lisa Loeb成为第一个拥有全美冠军单曲的无约艺人，随后发行的首张专辑《Tails》销售突破金唱片，勇夺全英音乐奖“最佳国际新进艺人奖”，并获得葛莱美奖“最佳流行重唱组合”的提名。97年的专辑《Firecracker》再度荣获葛莱美奖提名，单曲“I Do”亦打入Top 20。 睽违四年，这位备受赞誉的创作才女加盟音乐名厂A&M，推出了集合详实纪录生活中喜怒哀乐的精练文字与流畅优美的和谐音符、精心烘培的最新大碟《Cake And Pie》。Lisa Loeb参与谱写了专辑中所有的歌曲，而与多位杰出音乐人的相互激荡之下，新专辑宛如丰富的音乐百汇一般可口。从洋溢新古典感受的“The Way It Really Is”到勇敢刚毅、具民谣质感的“Shes Falling Apart”清楚呈现了《Cake And Pie》的多样性。充满实验精神的她，在新专辑中加入了更多的电吉他以及强烈的节拍，让歌曲从悲伤情绪中解放。首发单曲“Someone You Should Know”提醒大家终日汲汲营营追求的东西也许早就在身边；“Underdog”栩栩如生的唱出暗恋者追求爱情的心情；慢板的“Kick Start”叙述一对恋人试图为停滞不前的感情注入活力；而幽默轻快的“We Could Still Belong Together”生动描绘爱情应该要包容另一半的缺点，先前已入选2001年卖作电影《金法尤物》的电影原声带中。 by John BushIf she had never made another record, Lisa Loeb would still go down in the record books as the first unsigned artist to top the American charts; her single Stay — from the soundtrack to 1994s Reality Bites — spent three weeks at number one soon after the films release. Born in Dallas, Loeb studied piano as a child but later switched to guitar. At Brown University, she studied music theory and played as a duo with her roommate, Elizabeth Mitchell (who went on to indie favor with Ida). After college, she attended Bostons Berklee School of Music for one semester, but then formed a full band in 1990, christened (in tribute to J.D. Salinger) Nine Stories: Tim Bright on guitar, Jonathan Feinberg on drums, and Joe Quigley on bass.Lisa Loeb & Nine Stories began to gig around the Midwest, playing at Austins South by Southwest seminar. Loeb then hooked up with producer Juan Patiño, and in early 1992 released the cassette-only Purple Acoustic Tape, which she sold at live shows. Several major labels showed interest in her, but Loeb remained unsigned by late 1993, when her friend Ethan Hawke asked her to contribute a song for his next picture. Director Ben Stiller decided that he liked one of Loebs other songs even better, so Stay was inserted on the soundtrack. Released as a single in May 1994, it reached number one two months later and eventually sold over 750,000 copies worldwide. Loeb & Nine Stories received a Grammy nomination for Best Pop Performance by a Group, and won a Brit Award for Best International Newcomer. Geffen Records, which had shown interest in Loeb before Stay, signed her later in 1994 and re-teamed her with Juan Patiño. Her debut album Tails was released just over a year after her signing, and proved successful with commercial radio as well. Firecracker appeared in 1997, scoring a hit with I Do. Tours with the Wallflowers and Chris Isaak followed later that summer, as well as a stint with Lilith Fair.Five years later, Loeb returned with a third effort and her debut for A&M, Cake and Pie. She co-produced the album and collaborated with an impressive cast, which included Glen Ballard, boyfriend Dweezil Zappa, Randy Scruggs (Vince Gill, Sawyer Brown, Waylon Jennings), and Peter Collins (Bon Jovi, the Indigo Girls). First single The Way It Really Is was a moderate hit among college radio; We Could Still Belong Together was also included on the soundtrack to Legally Blonde. In mid-2002, Loeb inked a deal with Artemis. She relaunched Cake and Pie under the title Hello Lisa, which featured Sanrios signature Hello Kitty artwork on the cover, that November. The Sanrio/Loeb union proved fruitful, as it coincided with the cutesy characters popularity boom in trendy Hollywood. For her next trick, Loeb reunited with old college pal Elizabeth Mitchell for the childrens music album Catch the Moon; it featured a pleasant mix of traditionals and originals. In January 2004, Dweezil & Lisa premiered on The Food Network. It followed Zappa and Loeb in the daily lives as rockers and food lovers. Although it didnt include the single of the same name, The Way It Really Is was the title of Loebs 2004 album, her first for the Zoe label. The Very Best of Lisa Loeb first saw release in 2005 in Japan, and then early the next year in the rest of the world.